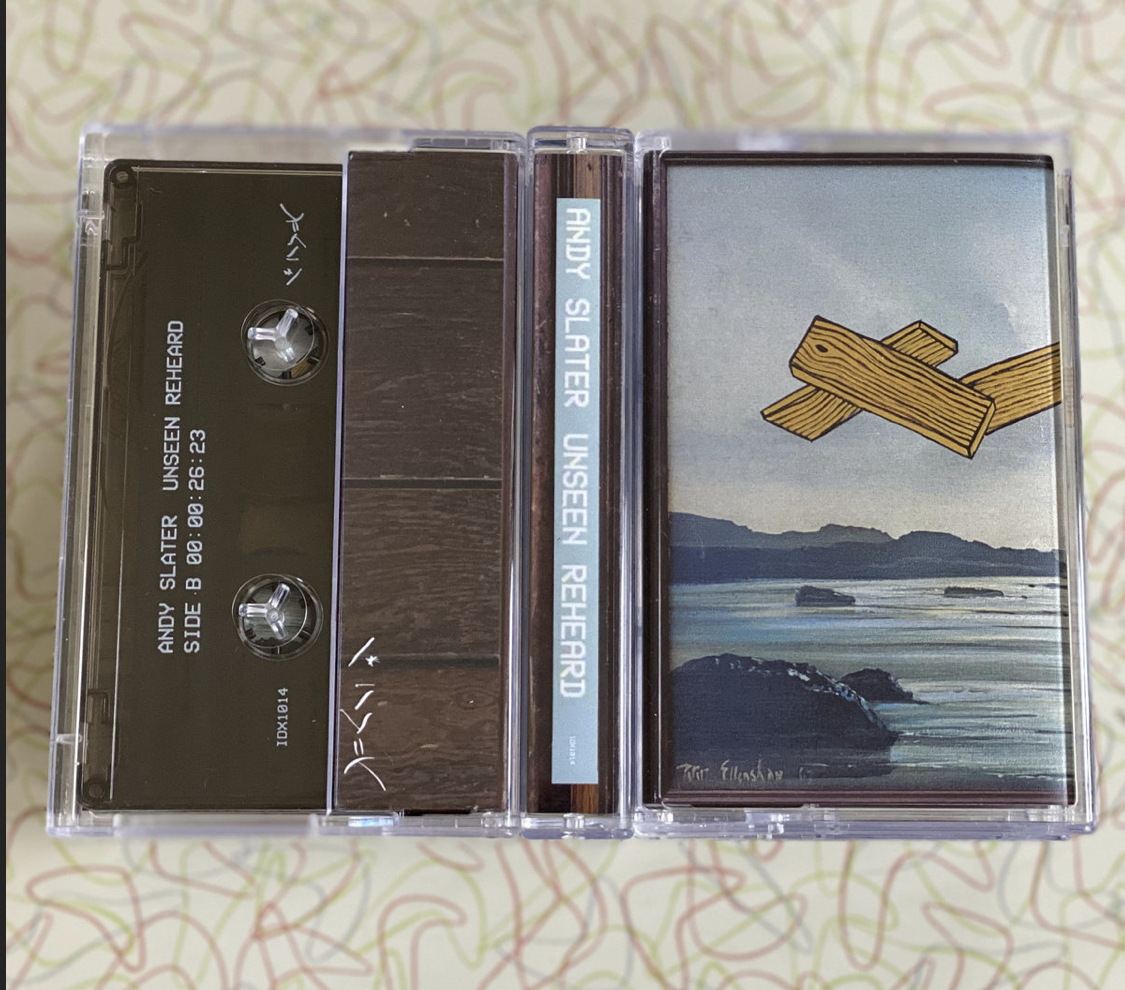 *This is the companion text to Unseen Reheard by sound artist Andy Slater, who is featured in Chapter 14: The Secret Life of Art and Accessibility.*

When a visually impaired person listens they are employing their ears in many ways. Safety, spatial identification, problem-solving, navigation and wayfinding, and of  course pouring a drink. Our hearing isn’t magical but if you ask I will tell you that it is.

It is safe to say that my listening practice and routines are different from most sighted people because of how I’ve trained my ears. Installation artist, Christine Sun Kim, who is deaf, has stated that hearing people are all passive listeners. I would like to up the ante and claim that sighted hearing people are the passive ones. Many of us blind folks are hyper-active listeners including yours truly. I use this accusation to drive the work on this album and ask that the viewer keep my magical hearing in mind.

The title, Unseen Reheard, was inspired by an obscure weird science theory that makes the assumption that blind people can hear trans-dimensionally by being in tuned with the subharmonics of the universe. It is called Crypto Acoustic Auditory Non- Hallucination and was proposed by Dr. Janet Herman in the late 1960s. Dr. Herman studied blind people who claimed to have heard things, events, beings, and indescribables that were not visually apparent to sighted people. None of this has been proven and I’m not sure it should be but the idea is more than intriguing. More on that shortly.

Every sound on this album was recorded on an iPhone/iPod using screen reader accessible IOS recording apps and their companion microphones.

Product placement: Apogee MetaRecorder App with Sennheiser Ambeo binaural headset and Shure Motiv App with MV88 microphone. The tech is compatible with something called a “screen reader” also known as the software that makes a computer talk to blind folks. If you only knew how many recordings were ruined or empty because of the brutally inaccessible recorders everyone in the game swears by you’d understand completely why I never bothered with the field recording medium until these new opportunities. I’ve wasted no time catching up to and then leaving behind what I had assumed was important about acoustic ecology, respecting the soundscape, or capturing the world around me as perfectly as I can.

Field recordings and nature recordings are often straight to tape and not composed. Be it a rain forest or a shipyard it is accepted if the recordist does nothing to alter he audio outside of cutting out the humanity. I do not follow this idea in my work.. I would get bored of it and frankly feel like I wouldn’t be presenting the viewer with something unique. Plus, I would have a hard time talking about my blindness or treating the work as an example of disability justice if my cane or clicks were trimmed from each piece. So I captured these scenes and sounds from all over the place and created fictional narratives and environments, threw in some CAANH theory, and allowed things to get weird.

When we partake in a sound walk we are often expected to be as silent as possible. Foots steps and human sounds are taboo but what about the sound of a white cane or echo location clicker or a powered wheelchair or whatever aides a disabled person may rely on?

Well, this may be a thing that no one has had to actually consider until now. I was at a gathering of the Midwest Society for Acoustic Ecology where Hildegard Westerkamp was the guest of honor. We were all chatting and discussing sound walking’s effects on society, its history of privilege, and how the motives have changed over the past decades. I had asked for the number of blind people that Hildegard had been on sound walks with. Her answer was a surprising “zero.” So the etiquette expected of the disabled soundwalker hasn’t been officially addressed. It looks like I will have to introduce the conversation starting with Unseen Reheard.

If you saw me banging my cane around a space in order to get a sense of its size, and make up you might worry about me. I’m dragging my cane crossed the roof of the subway tunnel to see how tall it is and what the angle of the arch is that keeps reflecting that sci fi echo. If I were to stop a passer by and ask how tall the ceiling is or what it is made of:

It is more effective for me to make a scene than it is to rely on someone or make them uncomfortable. Besides, if given the choice to ignore/avoid the blind person (because its so easy to just walk on by because they can’t see you). My banging around is clearly the result of my lived experienced as an overlooked blind pedestrian and muscle memory is somewhat convenient. I’m not lost if I am touching a wall, caning across a puddle, or nose up to sheet rock.. I’m just trying to “see” what something is without bothering you. This record contains hundreds of moments like this. I activate spaces with my cane and clicks and voice and hands. Actions that are often deleted from spatial recordings. I wish not to do the “blind person passing as a meek sighted person” thing. With this I define the proper etiquette for a blind sound walk and soundscape eavesdrop. Let the cane do its thing and appreciate it as you do the song of the mourning loon.

Accessibility is very important to me and frankly should be to all artists. When I visit an art museum with a sighted guide I am forced into a dictated experience. I’m viewing the visual art through someone else’s eyes, taste, and judgement no matter how accommodating they try to be. Visual description can be messy.. An art historian or museum guide will often give more information than I would ever request, a person who doesn’t have the confidence to try to describe art will become frustrated, while a kid will give the best and most honest go at it: “It is a silver cloud that looks like it was once the ink inside a giant pen but is now lost in the sky.” You just always have to take it as it comes when relying on other people’s eyes.

These experiences got me thinking…

As a sound artist how can I make my work accessible to those who cannot here it? Words, maybe? We have a vast vocabulary to describe things visual but not when it comes to sound. It is something I feel confident about experimenting with. I have written descriptions for every piece on Unseen Reheard, poetic, onomatopoetic, metaphoric, or however you accept it. Since all of the sounds represented in this work were recorded out in a world full of referential material there is no shortage of ways to describe the passage/narrative/composition of the sound. But still, it is a challenge that I am still trying to stick a flag into.

Cane drags along surfaces in every cardinal direction. The tactile data shows the shape and make of the cement. Below it lies dirt and above it lies stairs. Crunch beats out finesse.

Something watches the starlings and concludes they are in fact metallic.

Feet rush out the door into the passageway. Startled by the bang and the running shoes a group look away. The cane exceeds up the limestone to observe the cracks.

Fighting crabs dispense echoes throughout the courtyard the wind guiding their migration.

Regurgitated water clogged with static electrons. The shadows of voices bubble beneath

300 steps up the winding stairs to hear the campus from the bells’ point of view. With head inside the instrument the clicks and clacks, springing hammers, and wooden bonk is more appealing than the way the bells rattle your head. They ring out throughout unseen to all but 3.

Between the walls and wood of the grounds and inside the eyes and shadows of 120 years sound the other worldly. “They” are coming… over here…”

Brown gravel amplified into the air and a sudden outburst of something beyond this dimension perhaps near the splitter asks for permission to eavesdrop.

Through a sepia filter and golden dusk sirens intrude as an exhaust-heavy vessel rolls in front blocking the path.

A 10 speed scrolls to view and conversations follow. ‘Oh it’s a matter of waking up” ignoring the bang of the cane and its808 traits. The party goes unnoticed.

Attracted to the air like moths to light the sound swallows. The cane becomes invisible. The body disappears….

Against the base board with gunk and dust nudges the cane with pug nose curiosity.

It stings against a knot and whimpers.

Budging passed and smudging the gunk unsure if it stays put or if it crawls forward.

A keychain tambourine sets pace of the arched hallway.

The floor below is accounted for but just how far is the roof?

The cane balls in the crease of the arch and defines the curves.

A rounded bellow from a hallow point and a blasé thwack back and forth predicts the length of the hall and the height of the wall.

It is safe to say that no one has ever ventured a cane to this ceiling.

The “Om-Om” is now a conversation with a passerby.

and with out space between words she replies

into a mumble and continues on down the hall.

An unguided “Happy Holidays to you…” takes over the left ear.

Are they running away or taunting the beast? Oh, they’re enjoying themselves in the too-bright sun and $15 Pepsis and hour and five wait. It is a situation I decline all day.

A crowd forms to discuss further tourism and dinner concerns ignoring the screams of its members being dragged over steel rails above and beyond them.

Andy Slater is  a Chicago-based media artist, writer, performer, and Disability advocate/loudmouth. He is a member of the Society of Visually Impaired Sound Artists and a teaching artist with the Atlantic Center for the Arts’ Young SoundSeekers program, Midwest Society For Acoustic Ecology, and 3Arts Disability Culture Leadership Initiative. Andy holds a Masters in Sound Arts and Industries from Northwestern University and a BFA from the School of the Art Institute of Chicago. He is a 2022 United States Artists fellow, 2022-2023 Leonardo Crip Tech Incubator fellow and  a 2018 3Arts/Bodies of Work fellow at the University of Illinois Chicago. In 2020 Andy was acknowledged for his art  by The New York Times in their article, “28 Ways To Learn About Disability Culture.” He has exhibited and performed at many museums, festivals, and digital spaces around the world including: the Museum of Contemporary Art Chicago, McSweeney’s Quarterly Concern, the Contemporary Jewish Museum SF, Transmediale Festival Berlin,  and Flux Factory New York City.