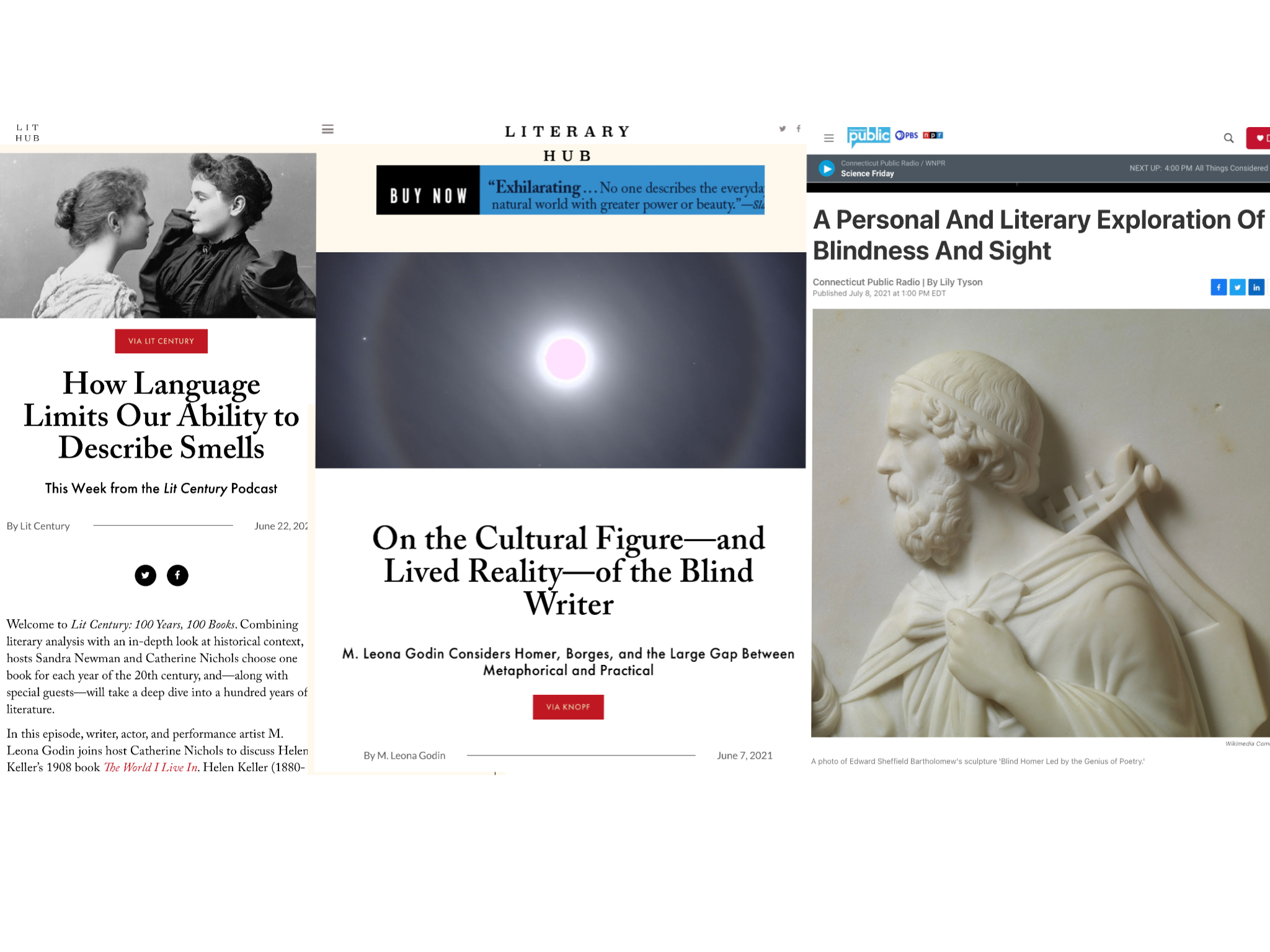 Thanks to the radio shows, podcasts, magazines, and other media outlets that help get the word out about the ideas, people, characters, and tropes examined in There Plant Eyes. We’ll continue to update this page in reverse chronological order.., so be sure to check back!

Delighted to talk with Glen Gordon on the FS Cast podcast brought to you by the makers of my text-to-speech and Braille software, JAWS! And here’s a link to the episode transcript as well. I discuss JAWS a few times in There Plant Eyes, and even quote from an FSCast episode in “Chapter 14: The Secret Life of Art and Accessibility.”

September 6, Letters and Politics on KPFA 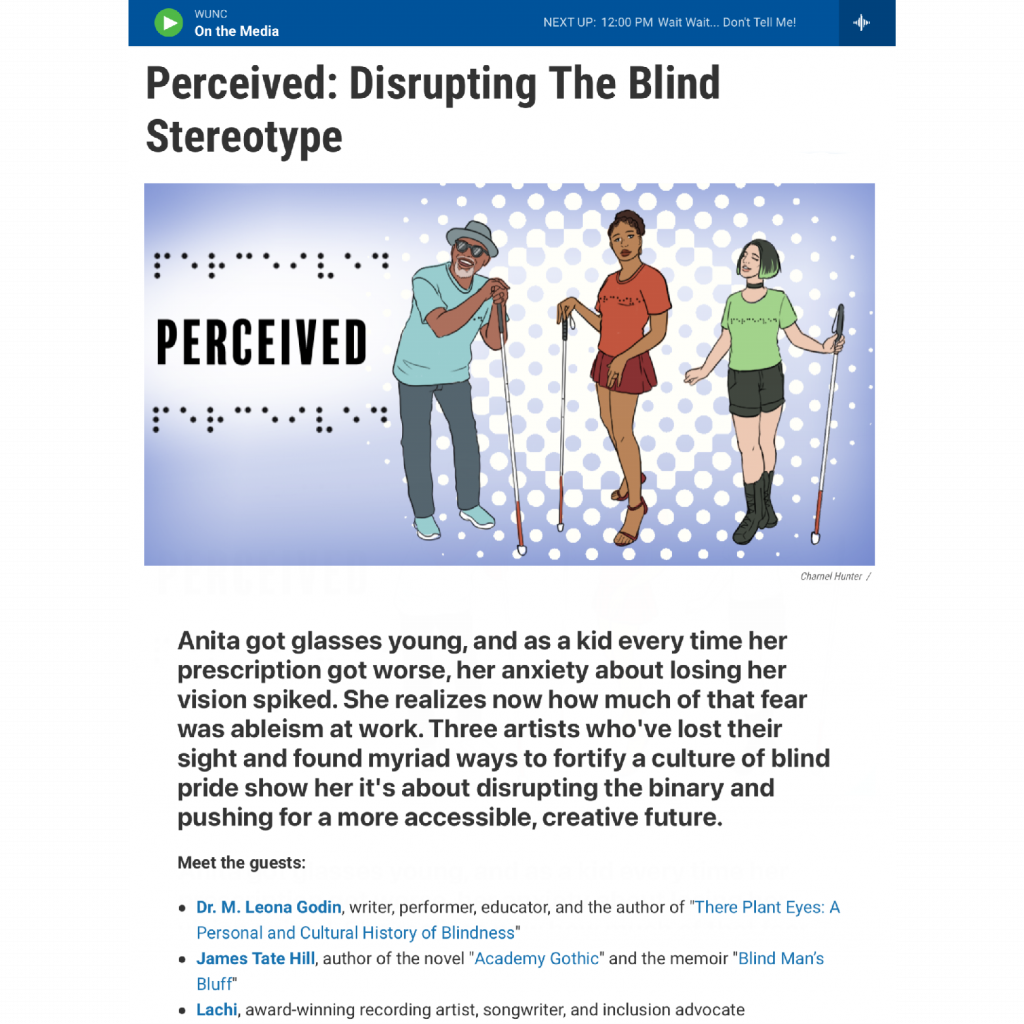 I was delighted to share radio airwaves with fellow blind culture-makers Lachi and James Tate Hill. Listen to our interviews on the podcast: “Perceived: Disrupting the Blind Stereotype.” 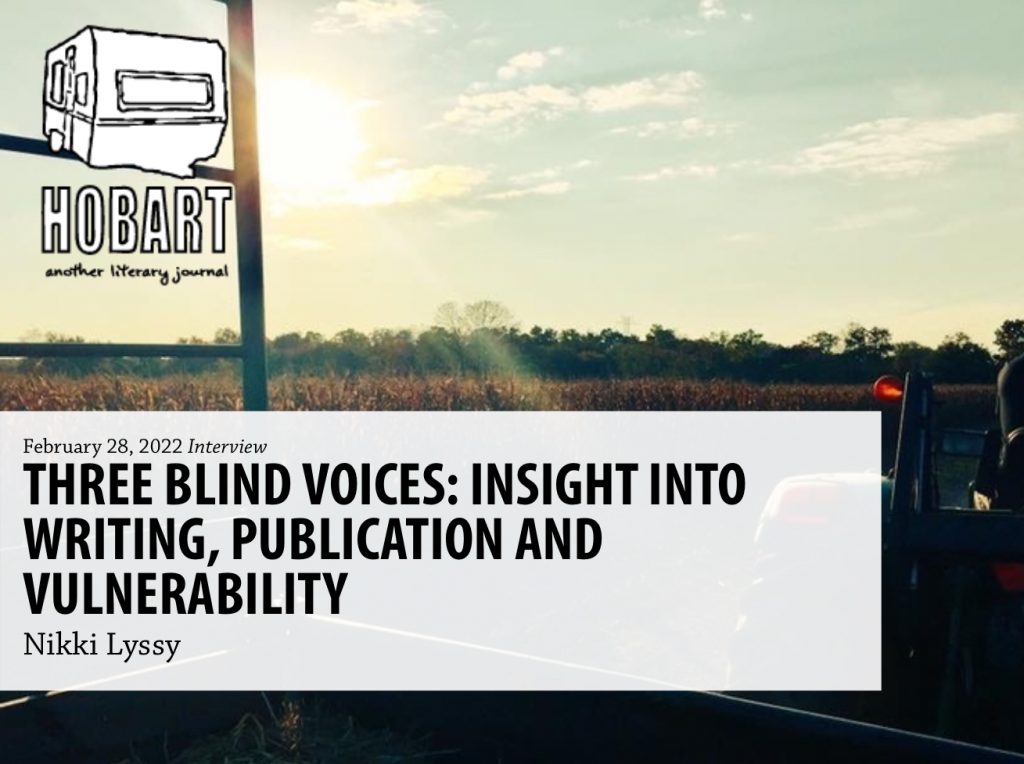 Delighted to be included in this lovely article by Nikki Lyssy: “Three Blind Voices: Insight into Writing, Publication, and Vulnerability.” 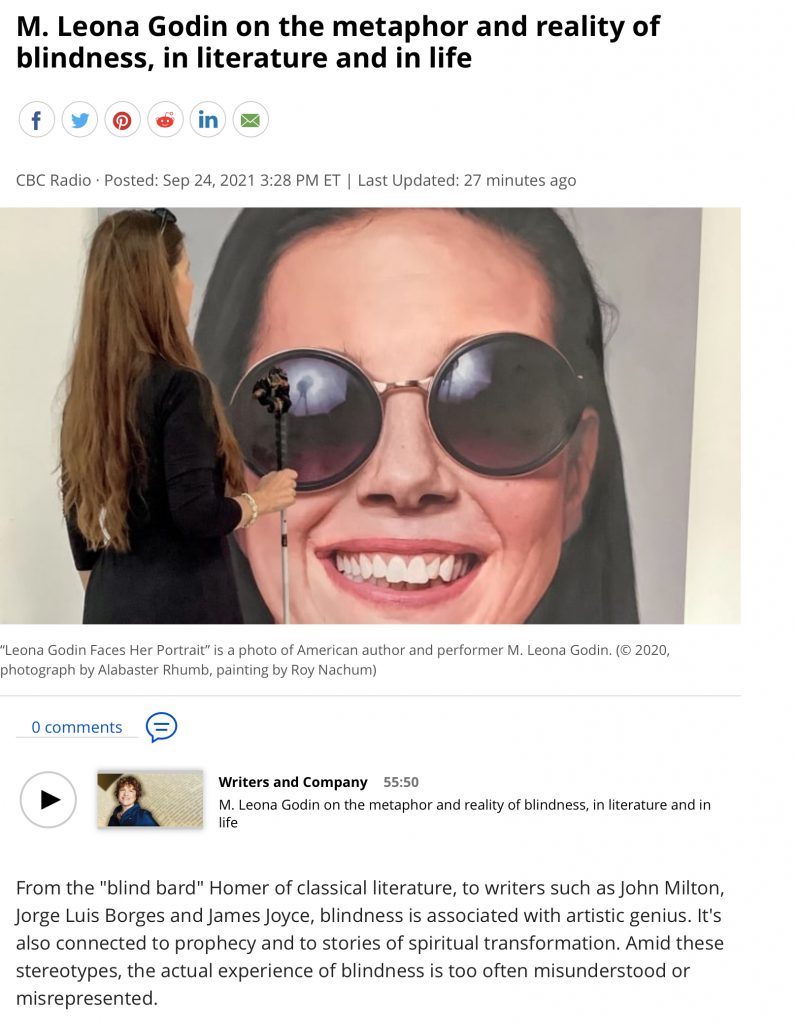 I’m so excited to share my conversation on CBC Radio’s Writers & Company with Eleanor Wachtel , who’s interviewed everybody who’s anybody in the literary world—John le Carré told her at the end of their interview: “You do it better than anyone I know.” Check out “M. Leona Godin on the Metaphor and Reality of Blindness in Literature and in Life” wherever you get your podcasts. 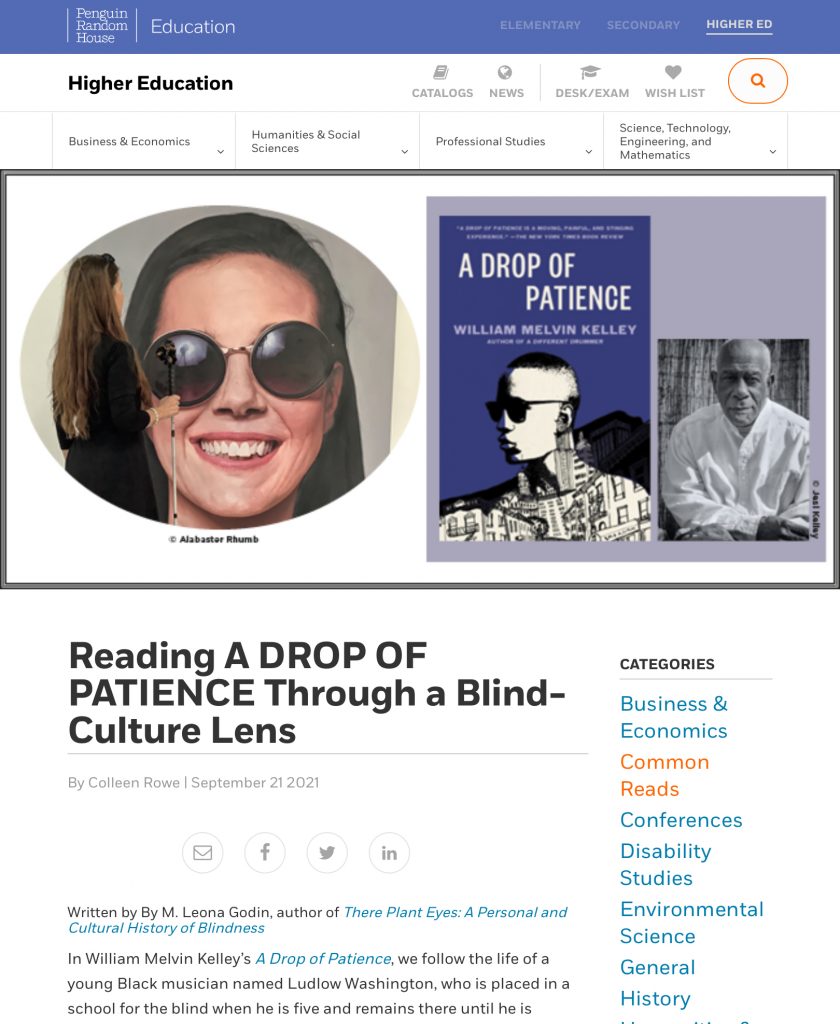 With an eye on next year’s paperback publication of There Plant Eyes (pun intended!), I wrote “Reading A Drop of Patience Through a Blind-Culture Lens.” It was a great opportunity to think about intersections of blindness and blackness in A Drop of Patience by William Melvin Kelley—the guy who coined the term “woke”. And, perhaps it goes without saying, but if you would be interested in bringing me and/or my book into your classroom, please reach out. 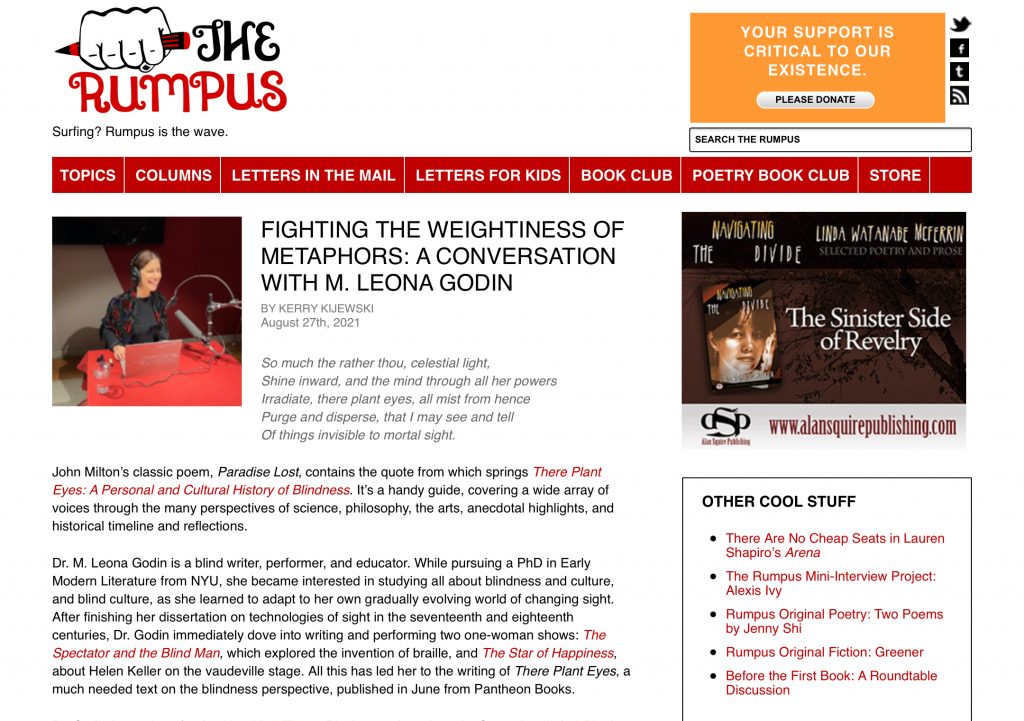 Kerry Kijewski, a Canadian freelance writer, sensitivity reader, advocate, and podcast host of the show Outlook On Radio Western, interviewed me for The Rumpus. “Fighting the Weightiness of Metaphors: A Conversation with M. Leona Godin,” elaborates on many of the cultural threads that animate There Plant Eyes and so much of my academic and artistic work.

I was delighted to share some thoughts on misconceptions about and faulty portrayals of blind people in the media and beyond on Inside Edition!

I was delighted to speak with Jane Roper on her weekly The Zeitgeist on A Mighty Blaze, a very cool YouTube and Facebook channel created during the pandemic to help writers get the word out about their books. 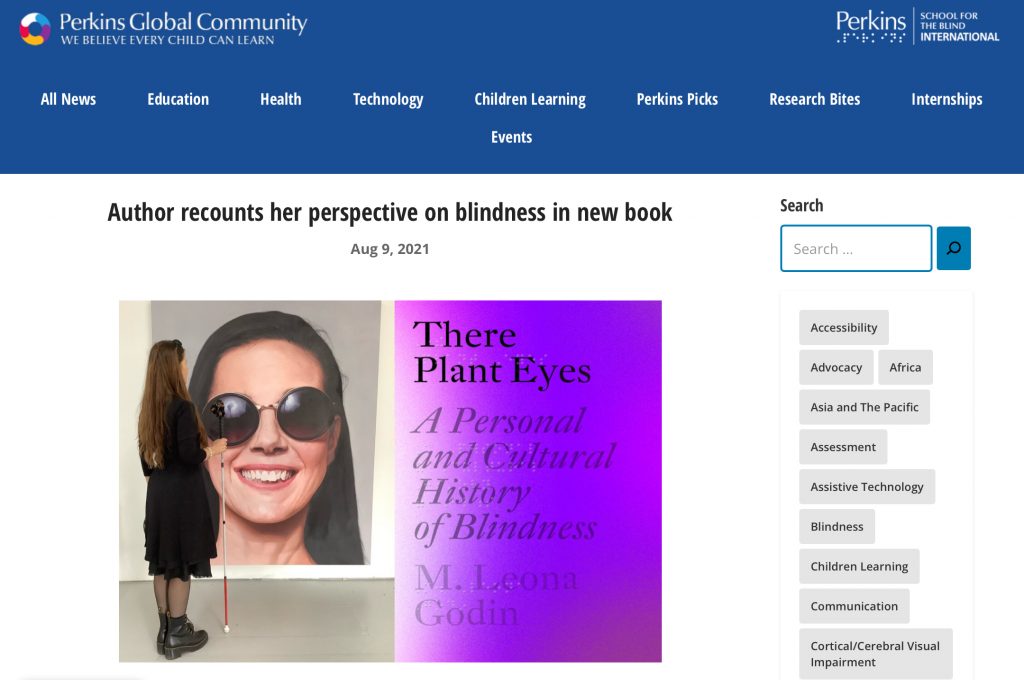 One of the legendary schools for the blind in the world, @PerkinsSchool, makes several appearances in There Plant Eyes, so I’m honored that they chose to feature me and my book on their news site in “Author recounts her perspective on blindness in new book.” 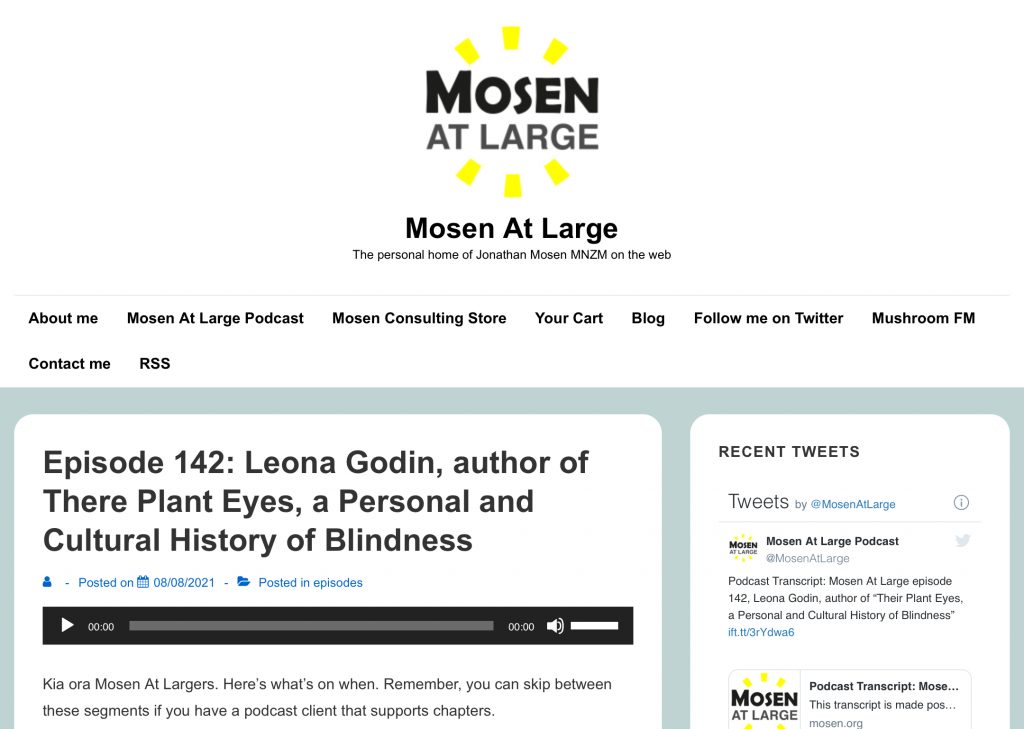 I was absolutely delighted to speak with the smart and charming Jonathan Mosen on his international blind tech and culture podcast about some of the themes in There Plant Eyes, such as how we might move from the stigma of blindness to a formulation of blind pride alongside other pride movements. 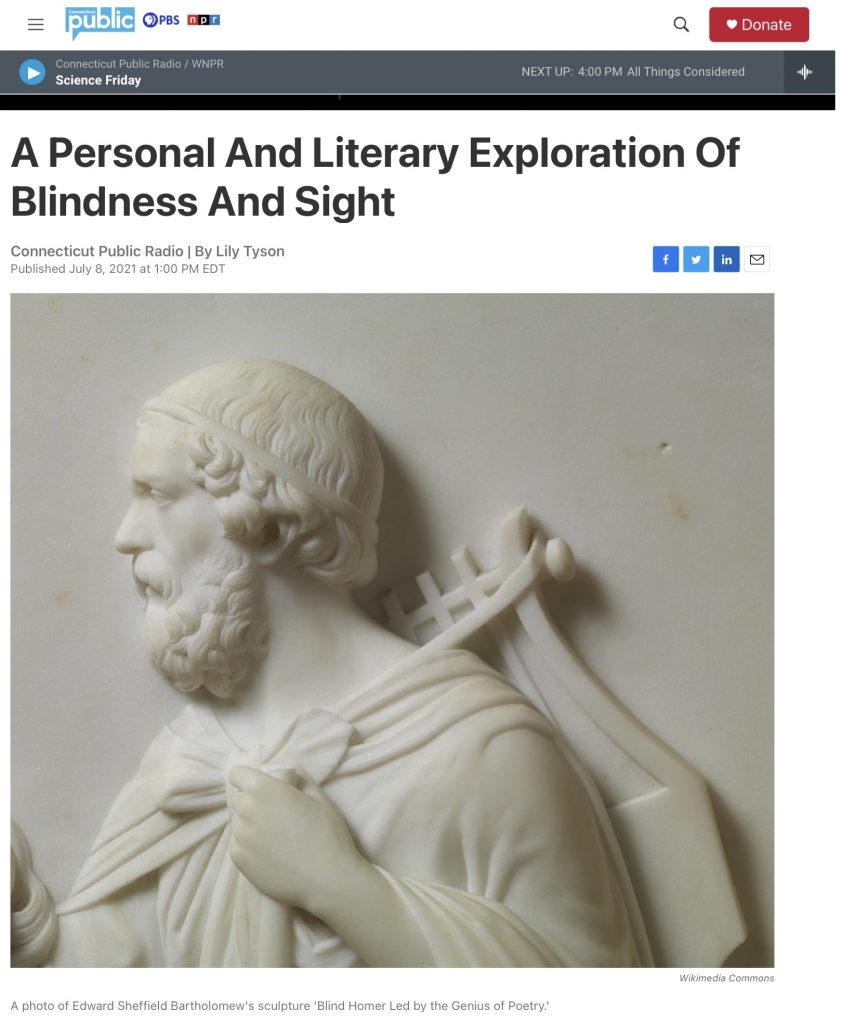 So cool to talk to Colin McEnroe about the engrained tropes of blindness on this episode called “A Personal and Literary Exploration of Blindness and Sight.” Our conversation was wide-ranging and fun, and I was only a little intimidated to be live on Connecticut’s WNPR radio! 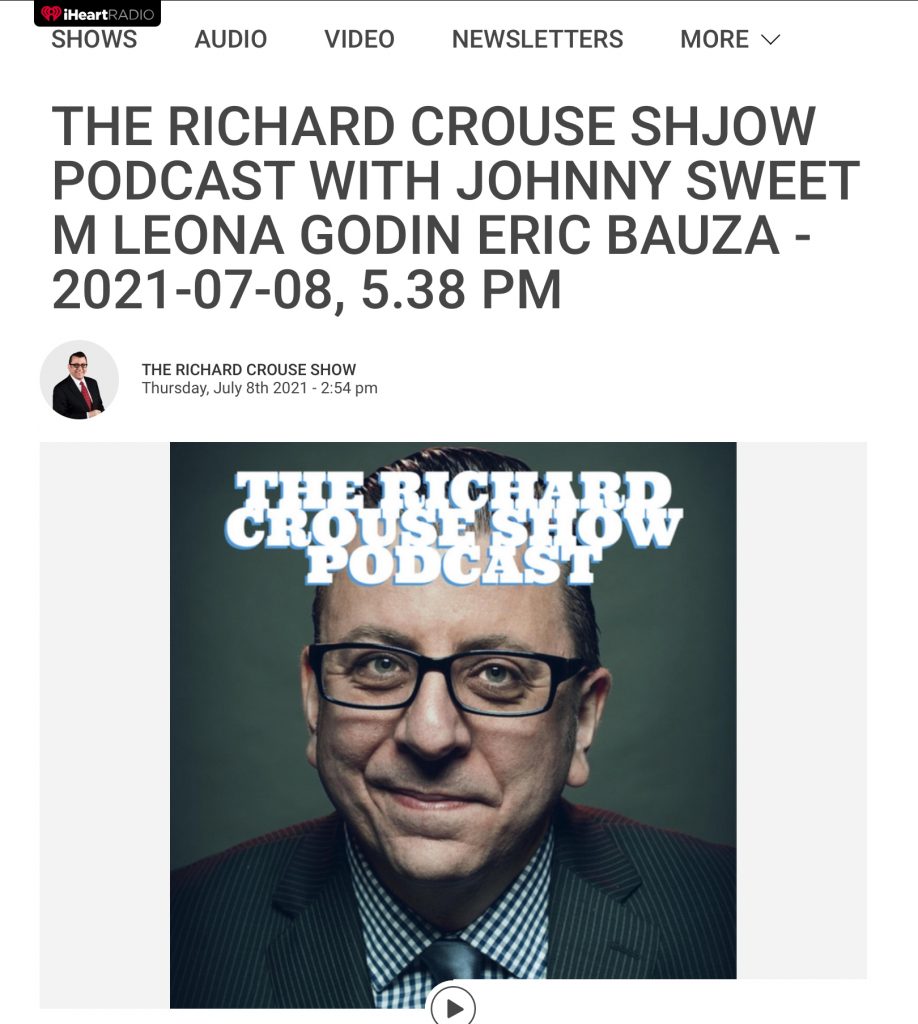 What a delight to speak to Richard Crouse all the way from Canada about my punk roots, sighted assumptions, and so much more on this episode that just happened to also feature an interview with a filmmaker who made a documentary about the Queens bar scene during COVID—including my old neighborhood bar, The Sparrow! What are the chances? 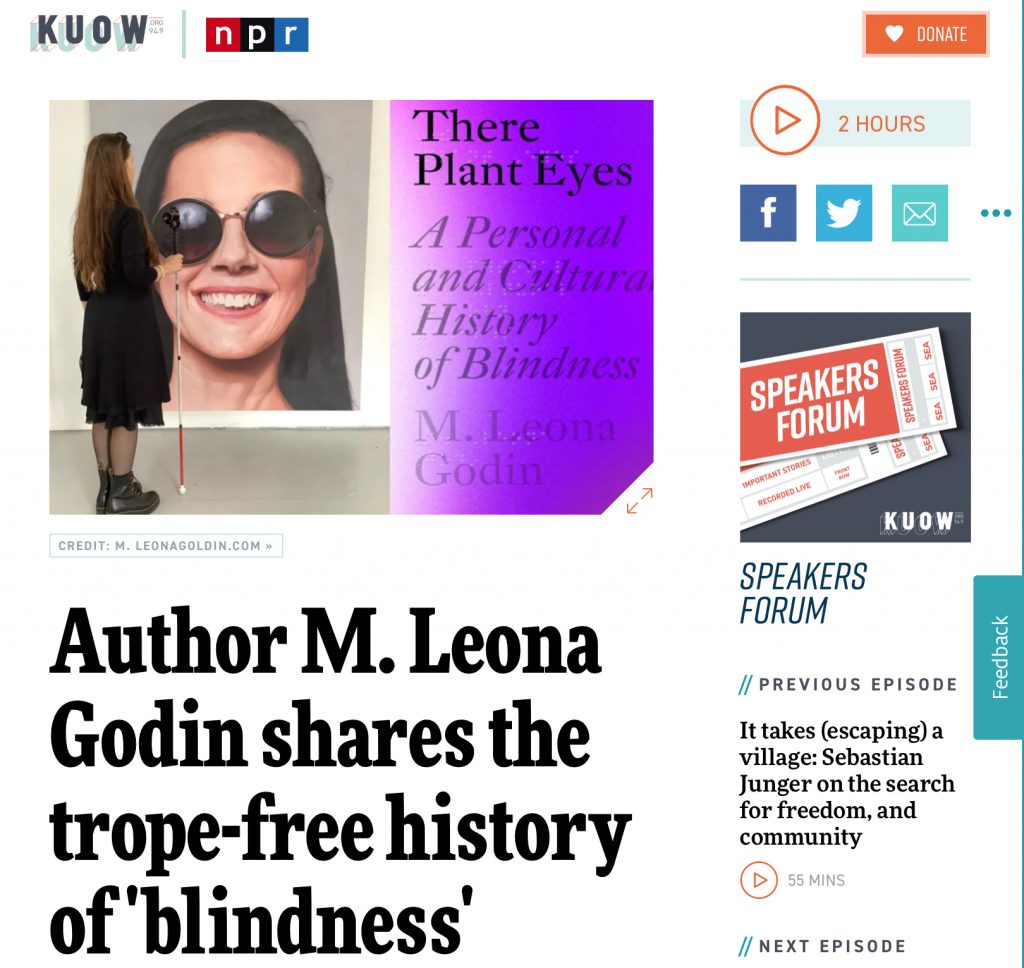 This is a rebroadcast on KUOW (A Washington state NPR station) of my conversation with Keith Rosson that was recorded live at Town Hall Seattle as part of my Virtual Monster Book Tour. 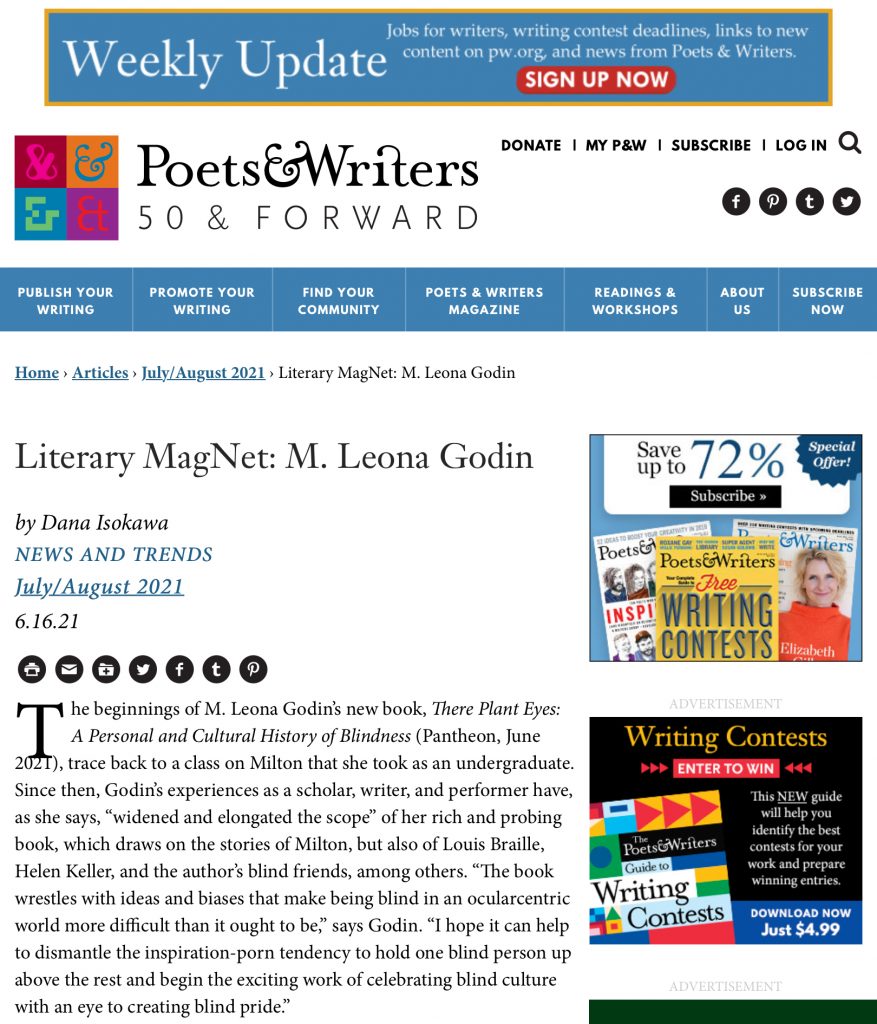 Thanks to Dana Isokawa for giving me the opportunity to praise the lit mags and editors that gave me the experience, confidence, and community to become a published author and founding editor. In this edition of “Literary MagNet,” I talk about Catapult, Quail Bell Magazine, Newtown Literary, Danse Macabre, and my very own Aromatica Poetica. 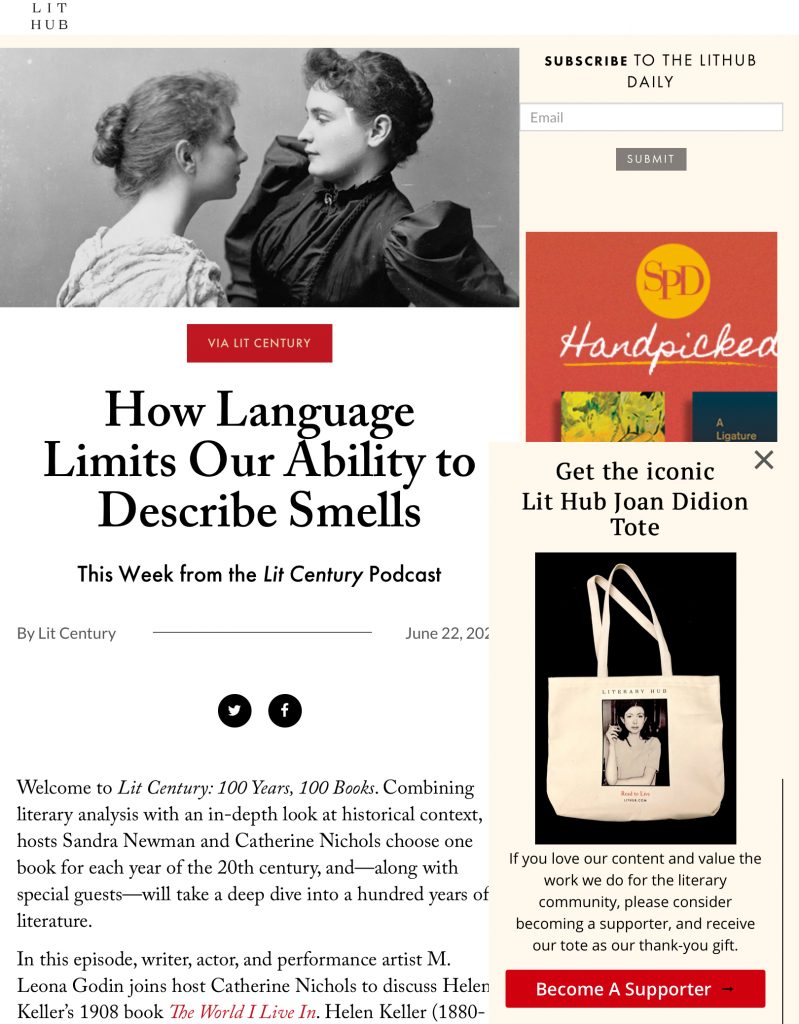 I was delighted to talk to Catherine Nichols about Helen Keller’s The World I Live In (1908) on this Literary Hub podcast that dedicates one show to each year of the Twentieth Century. Listen to us discuss Keller’s politics, her time performing in vaudeville, and her perceptual experience that so many of her critics dismissed as insufficient on “How Language Limits Our Ability to Describe Smells.” 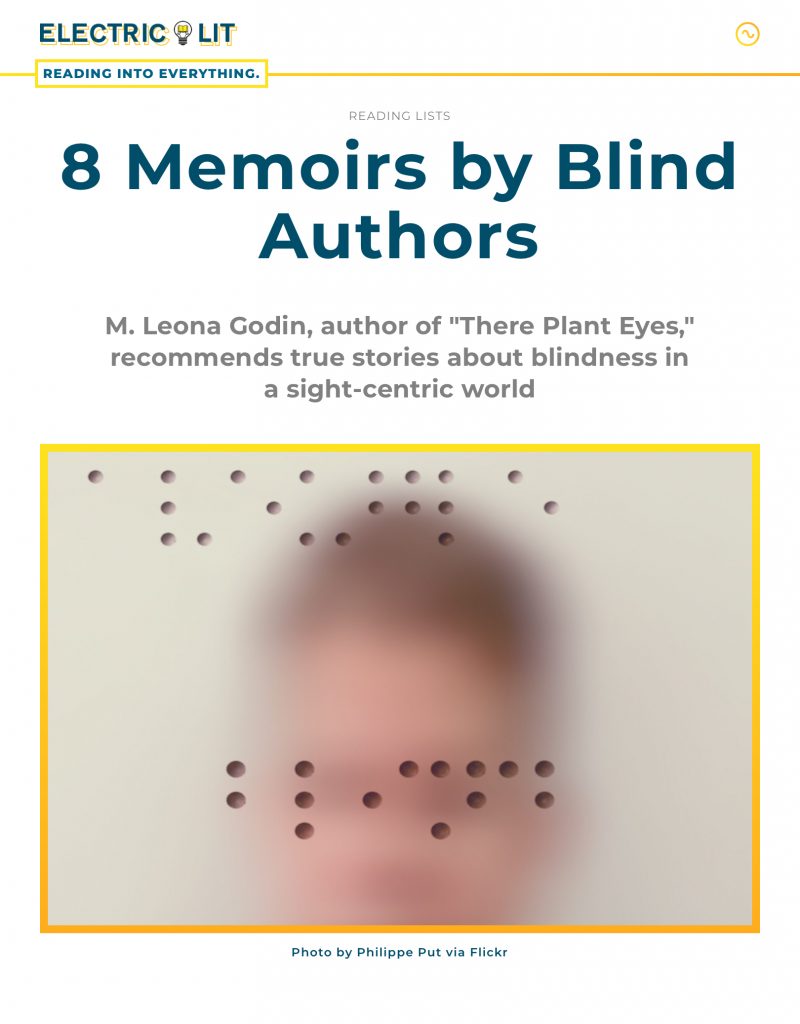 It was an utter delight to put together this list of “8 Memoirs by Blind Authors,” that includes some wonderful writers who I’m proud to call friends, including Haben Girma, Stephen Kuusisto, Georgina Kleege, James Tate Hill, Laurie Ruben, and Jim Knipfel.

June 15, This Is the Author

At the end of the long and arduous (and sometimes fun) recording of the audiobook of There Plant Eyes for PRH Audio, we did a short interview about the process, which is featured in this cool podcast that goes behind the audiobook scenes to tell all about what it’s like to record your own words. For me, recording my own words was by ear using my passionless text-to-speech synthesizer as electronic Cyrano. 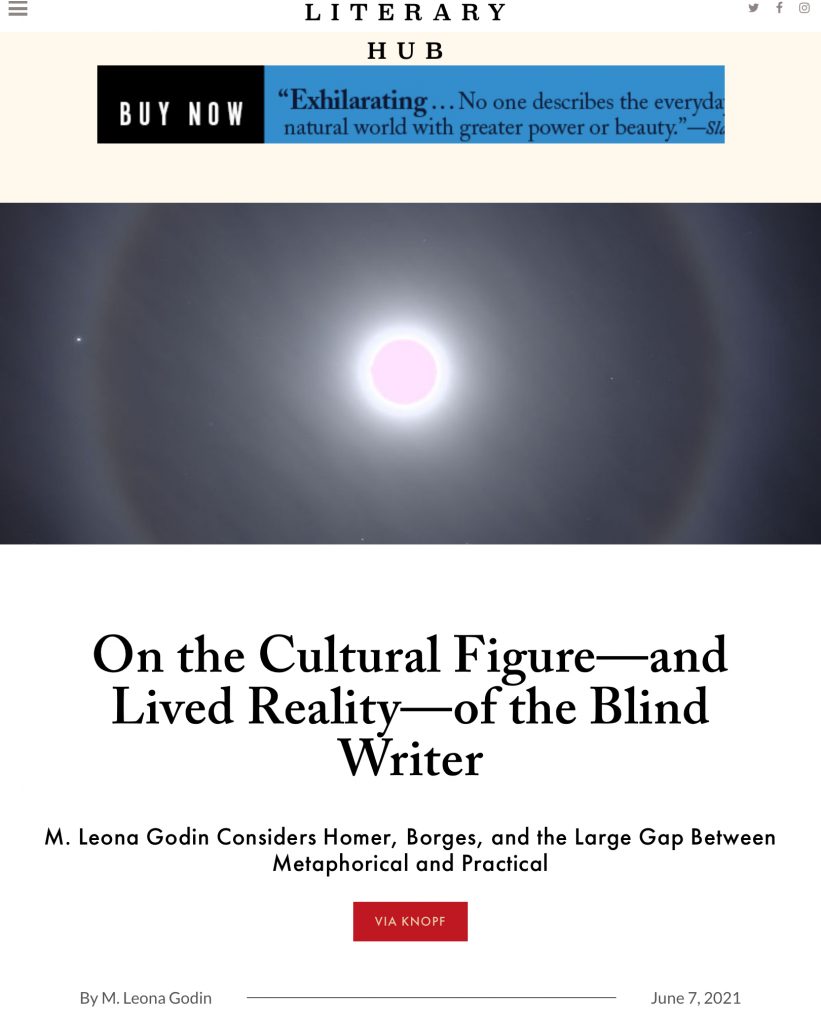 Thanks to Literary Hub for publishing the opening pages of “Homer’s Blind Bard,” which is the first chapter of There Plant Eyes. And if you really want to geek out with TPE, check out our idiosyncratically hyperlinked endnotes for the chapter HERE! 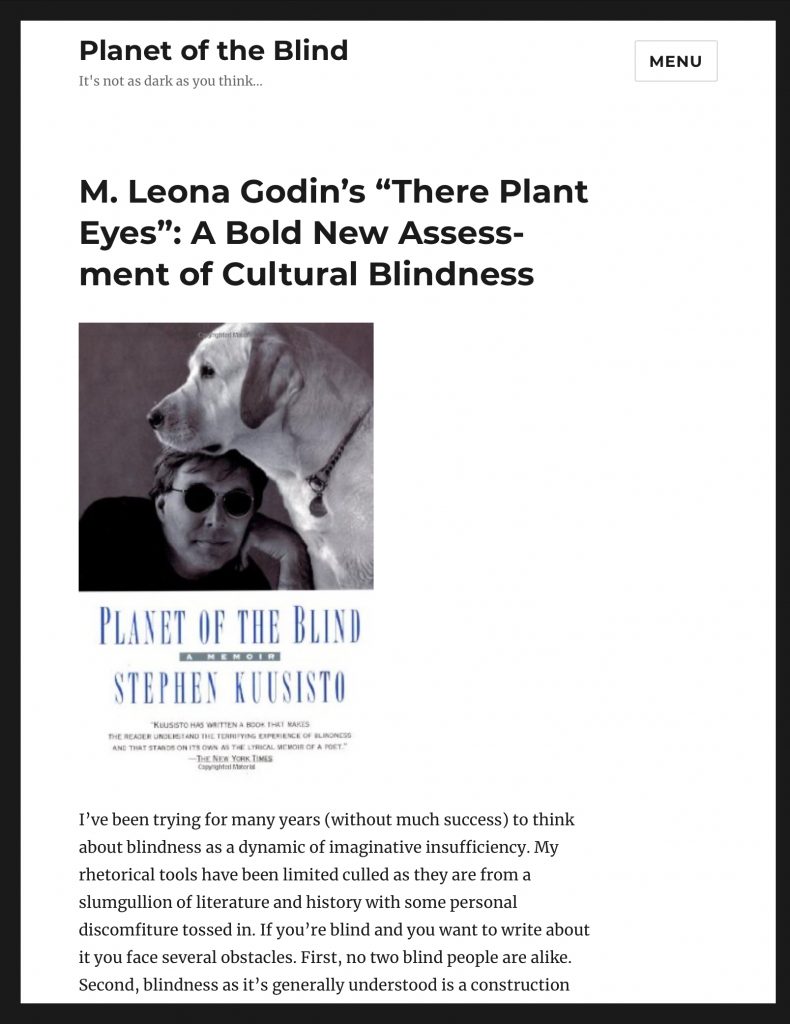 Thanks to poet and memoirist Stephen Kuusisto for taking the time to write “M. Leona Godin’s There Plant Eyes: A Bold New Assessment of Cultural Blindness,” a lovely and personal response to There Plant Eyes on his blog Planet of the Blind (named for his wonderful first memoir).