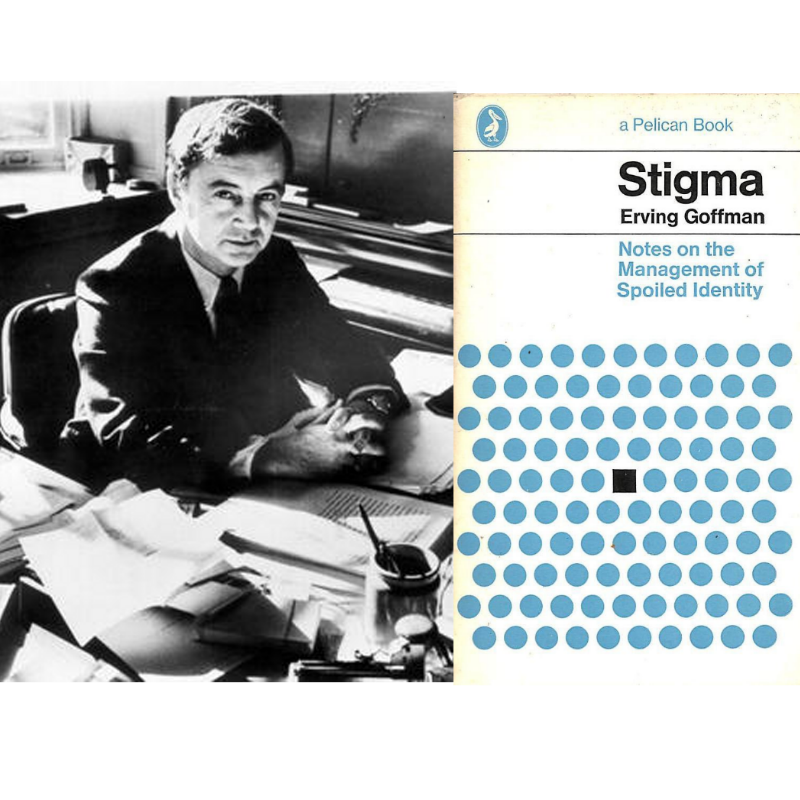 In 1988, a socio-linguist at the university of Pennsylvania posted a note on the departmental bulletin board announcing she had moved her late husband’s personal library into an unused office. Anyone who wanted any of the books should feel free to take them. Her husband had been the chair of Penn’s sociology department. They’d married in 1981, and he died the following year at age sixty. Normally you’d expect the books and papers to be donated to some library to assist future researchers, but she’d recently remarried, so I guess she either wanted to get rid of any reminders of her previous husband, or simply needed the space.

At the time my then-wife was a grad student in Penn’s linguistics department, and told me about the announcement when she got home that afternoon.

Well, had this professor’s dead husband been any plain, boring old sociologist, I wouldn’t have thought much about it, but given her dead husband was Erving Goffman, I immediately began gathering all the boxes and bags I could find. That night around ten, when she was certain the department would be pretty empty, my then-wife and I snuck back to Penn under cover of darkness and I absconded with Erving Goffman’s personal library. Didn’t even look at titles—just grabbed up armloads of books and tossed them into boxes to carry away.

As I began sorting through them in the following days, I of course discovered the expected sociology, anthropology and psychology textbooks, anthologies and journals, as well as first editions of all of Goffman’s own books, each featuring his identifying signature (in pencil) in the upper right hand corner of the title page. But those didn’t make up the bulk of my haul.

There were Catholic marriage manuals from the Fifties, dozens of volumes (both academic and popular) about sexual deviance, a whole bunch of books about juvenile delinquency with titles like Wayward Youth and The Violent Gang, several issues of Corrections (a quarterly journal aimed at prison wardens), a lot of original crime pulps from the Forties and Fifties, avant-garde literary novels, a medical book about skin diseases, some books about religious cults (particularly Jim Jones’ Peoples Temple), a first edition of Michael Lesy’s Wisconsin Death Trip, and So many other unexpected gems. It was, as I’d hoped, an oddball collection that offered a bit of insight into Goffman’s work and thinking.

Erving Goffman was born in Alberta, Canada in 1922. After entering college as a chemistry major, he eventually got his BA in sociology in 1948, and began his graduate studies at The university of Chicago.

In 1952 he married Angelica Choate, a woman with a history of mental illness, and they had a son. The following year he received his PHD from Chicago. His thesis concerned public interactions and rituals among the residents of one of the Shetland Islands off the coast of Scotland. Afterward, he took a job with the National Institute for Mental Health in Bethesda, Maryland. His first book, The Presentation of Self in Everyday Life, which evolved out of his thesis, came out in 1956, and his second, Asylums, which resulted from his work at N.I.M.H. (National Institute of Mental Health), was released five years later. In 1958 he took a teaching position at UC-Berkeley, and was soon promoted to full professor. His wife committed suicide in 1964, and in 1968 he joined the faculty of the University of Pennsylvania as the chair of the sociology department, a post he would hold until his death in 1982.

Citing intellectual influences from anthropology and psychology as well as sociology, Goffman was nevertheless a maverick. Instead of controlled clinical studies and statistical analysis, Goffman based his work on careful close observation of real human interactions in public places,. Instead of focusing on the behaviors of large, faceless groups like sports fans, student movements or factory workers, he concentrated on the tiny details of face-to-face encounters, the gestures, language and behavior of individuals interacting with one another or within a larger institutional framework. Instead of citing previous academic papers to support his claims, he’d more often use quotes from literary sources, letters, or interviews. He created a body of work around those banal, microcosmic day-two-day experiences which had been all but ignored by sociologists up to that point. After his death he was considered one of the most important and influential sociologists of the twentieth century.

Without getting into all the complexities and interpretations of Goffman’s various theories (despite his radical subjective approach, he was still an academic after all), let me lay out simpleminded thumbnails of the two core ideas at the heart of his work.

Taking a cue from both Freud and Shakespeare, he employed theatrical terminology to argue that whenever we step out into public, we are all essentially actors on a stage. We wear masks, we take on certain behaviors and attitudes that differ wildly from the characters we are when we’re at home. All our actions in public, he claimed, are social performances designed (we hope) to present a certain image of ourselves to the world at large. The idea of course has been around in literature for centuries, but Goffman was the first to seriously apply it in broad strokes to sociology.

His other, and related, fundamental idea was termed frame analysis, the idea being that we perceive each social encounter—running into that creepy guy on the train again, say, or arguing with the checkout clerk at the supermarket about the quality of their potatoes—as something isolated and contained, a picture within a frame, or a movie still.

He used those two models to study day-to-day life in mental institutions and prisons, note the emergence of Texas businessmen adopting white cowboy hats as a standard part of their attire, analyze workplace interactions and the complicated rituals we go through when we run into someone we sort-of know on the sidewalk.

I first read Goffman in college when his 1964 book, Stigma: Notes on the Management of Spoiled Identity, was used in a postmodern political science course I was taking. In the slim volume, Goffman studied the conflicts and prejudices ex-cons, mental patients, cripples, the deformed and other social outcasts encountered when they stepped out into public, as well as the assorted codes and tricks they used to pass for normal. When passing was possible, anyway. At the time I was smitten with the book and these tales of outsiders, being a deliberately constructed outsider myself (though as a nihilistic cigar-smoking petty criminal punk rock kid, I had no interest in passing for normal). I was also struck to read a serious sociological study that cited Nathaniel West’s Miss Lonelyhearts—my favorite novel at the time—as supporting evidence.

Thirty-five years later, and after having read all of Goffman’s other major works, I returned to Stigma again, but with a different perspective. Although my youthful Romantic notions about social outcasts still lingered, by that time I’d become a bona-fide and inescapable social outcast myself, tapping around New York with a red and white cane.

Goffman spent a good deal of the book focused on the daily issues faced by the blind, but in 1985 those weren’t the outsiders who interested me. Now that I was one of them myself, I must say I was amazed and impressed by the accuracy of Goffman’s observations. He pointed out any number of things that have always been ignored by others who’ve written about the blind. Like those others, he notes that Normals, accepting the myth that our other senses become heightened after the loss of our sight, believe us to have superpowers of some kind. (For the record, I never dissuade people of this silly notion.) But Goffman took it one step further, noting that to Normals, a blindo accomplishing something, well, normal—like lighting a cigarette—is taken to be some kind of superhuman achievement, and evidence of powers they can barely begin to fathom.

(Ironically, he writes in Asylums that the process of socializing mental patients is a matter of turning them into dull, unobtrusive and nearly invisible individuals. Those are good citizens.)

Elsewhere in Stigma Goffman also points out—and you cannot believe how commonplace this is—that Normals, believing us to have some deep insights into life and the world, feel compelled, uninvited and without warning, to stop the blind on the street or at the supermarket to share with them their darkest secrets, medical concerns and personal problems as if we’d known them all our lives. He also observed the tendency for Normals to treat us not only like we’re blind, but deaf and lame as well, yelling in our ears and insisting on helping us out of chairs.

Ah, but one thing he brought up, which I’ve never seen anyone else mention before, is the fate awaiting those blindos (or cripples of any kind) who actually accomplish something like writing a book. It doesn’t matter if the book had absolutely nothing to do with being a cripple. I’ve published eleven books to date, and only two of them even mention blindness. It doesn’t matter. If a cripple makes something of him or herself, that cripple then becomes a lifelong representative of that entire class of stigmatized individuals, at least in mainstream eyes. From that point onward he or she will always be not only “that Blind Writer” or “that Legless Architect,” but a spokesperson on any issues pertaining to their particular disability. I was published long before I developed that creepy blind stare, but if I approach a mainstream publication nowadays, the only things they’ll let me write about are cripple issues. Every now and again if I need the check, I’ll, yes, put on the mask and play the role. But I’m bored to death with cripple issues, which is why whenever possible I neglect to mention to would-be editors that I’m blind. And I guess that only supports Goffman’s overall thesis, right?

Well, anyway, a series of four floods in my last apartment completely wiped out my prized Goffman library (as well as my prized novelization collection), so in retrospect I guess that professor at Penn probably would have been better off donating them to the special collections department of some library.

*Originally published on The Chiseler*

Jim Knipfel is a journalist, memoirist and novelist.  He is the author of twelve books, including Slackjaw, These Children Who Come at You With Knives, and The Blow-Off. His work has appeared in The Wall Street Journal. New York Post, New York Daily  News, The Believer and other publications.