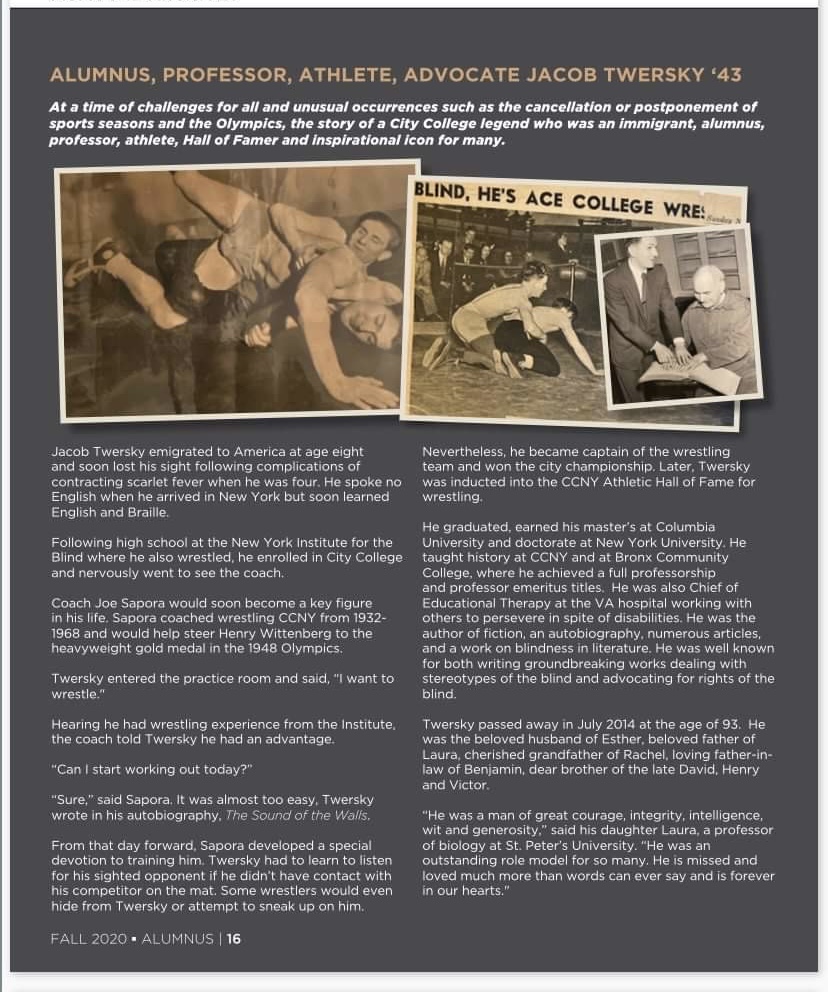 IN the previous chapter, “Sanctified by Affliction, or Not,” Godin discusses the discrimination and biases felt by many blind people in their personal lives—from dating and marriage and children—to the lack of representations in the media that contribute to those prejudices. In this chapter “Portrait of the (Working) Writer as Blind,” She introduces the professional prejudices that so many of us face when seeking gainful employment. The working writer is a stand-in for people of all professions trying to obtain work in a society that systemically discounts our abilities.

Here we meet professional writers such as (Laurie) Alice Eakes and  Jim Knipfel, and compare their struggles with those of other blind people trying hard to enter an ableist and discriminatory workforce. WE also revisit the work of historian, novelist, and wrestler, Jacob Twersky, whom we first encountered in “Out, Vile Jelly!” In his darkly realistic novel, The Face of the Deep (1953), we glimpse how much has change and how much has stayed the same for blind people seeking gainful employment.

Portrait of the (Working) Writer as Blind Endnotes

Face of the Deep Letter to the Editor

Godin is not the only one to appreciate The Face of the Deep. We were heartened to find this Letter to the Editor in the New York Times Time Machine published in 1953 as a rebuttal to the harsh New York Times book review of a few months earlier…

IT is important for sighted readers of the Book Review to know that in contrast to the opinion of Baynard Kendrick who reviewed “The Face of the Deep,’’ there are others professionally familiar with literature for and by the blind, and with the work of agencies for the blind and their personnel, who honestly believe that Jacob Twersky’s novel is a brilliant, truthful evocation of the world of the blind. As literature the book is unique—in fact a pioneer landmark in fiction by a blind writer about the terra incognita of the “country of the blind” and those who inhabit it.

(Thanks to Twersky’s daughter, Laura, for this 2020 article from the CUNY alumnae bulletin that we used for our featured image.)

At a time of challenges for all and unusual occurrences such as the cancellation or postponement of sports seasons and the Olympics, the story of a City College legend who was an Immigrant, alumnus, professor, athlete, Hall of Famer and Inspirational Icon for many.

Jacob Twersky emigrated to America at age eight and soon lost his sight following complications of contracting scarlet fever when he was four. He spoke no English when he arrived in New York but soon learned English and Braille.

Following high school at the New York Institute for the Blind where he also wrestled, he enrolled in City College and nervously went to see the coach.

Coach Joe Sapora would soon become a key figure in his life. Sapora coached wrestling CCNY from 1932- 1968 and would help steer Henry Wittenberg to the heavyweight gold medal in the 1948 Olympics.

Twersky entered the practice room and said, “I want to wrestle.”

Hearing he had wrestling experience from the Institute, the coach told Twersky he had an advantage.

“Can I start working out today?”

“Sure,” said Sapora. It was almost too easy, Twersky wrote in his autobiography, The Sound of the Walls.

From that day forward. Sapora developed a special devotion to training him. Twersky had to learn to listen for his sighted opponent if he didn’t have contact with his competitor on the mat. Some wrestlers would even hide from Twersky or attempt to sneak up on him.

Nevertheless, he became captain of the wrestling team and won the city championship. Later, Twersky was inducted into the CCNY Athletic Hall of Fame for wrestling.

He graduated, earned his master’s at Columbia University and doctorate at New York University. He taught history at CCNY and at Bronx Community College, where he achieved a full professorship and professor emeritus titles. He was also Chief of Educational Therapy at the VA hospital working with others to persevere in spite of disabilities. He was the author of fiction, an autobiography, numerous articles, and a work on blindness in literature. He was well known for both writing groundbreaking works dealing with stereotypes of the blind and advocating for rights of the blind.

Twersky passed away in July 2014 at the age of 93. He was the beloved husband of Esther, beloved father of Laura, cherished grandfather of Rachel, loving father-in- law of Benjamin, dear brother of the late David, Henry and Victor.

“He was a man of great courage, integrity, intelligence, wit and generosity,” said his daughter Laura, a professor of biology at St. Peter’s University. “He was an outstanding role model for so many. He is missed and loved much more than words can ever say and is forever in our hearts.”