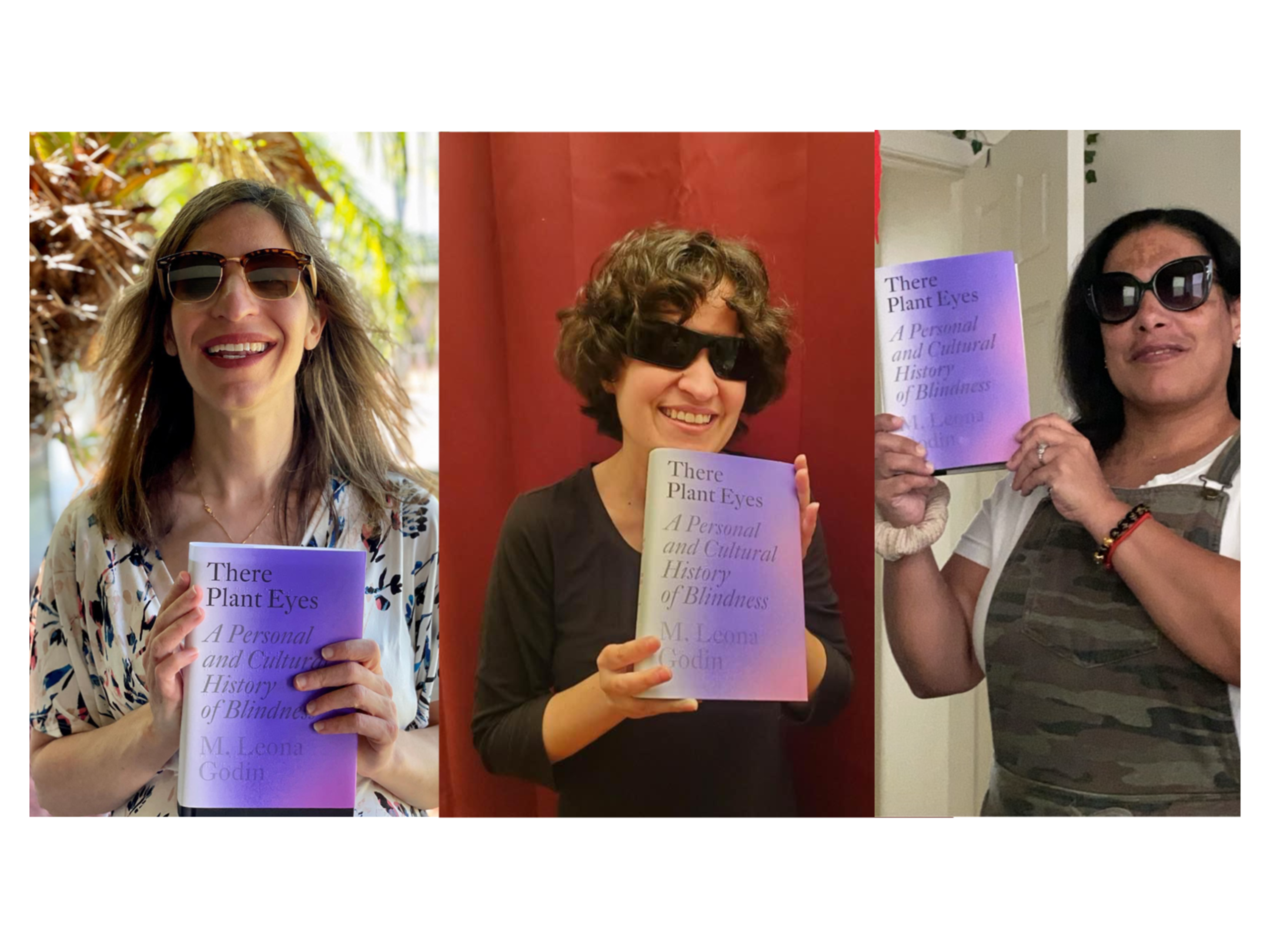 In the previous chapter, “Helen Keller in Vaudeville and in Love,” Godin incites  readers to think about how notions of the virginal blind oppressed Helen Keller and stifled her dreams of becoming a wife and mother. Representation matters. Since mainstream media rarely (if ever) depict a sexual blind person or a mother who happens to be blind or a literal blind date, it’s no wonder most sighted people cannot imagine that a blind person might have the same urges and desires as they do. In “Sanctified by Affliction, or Not,” Godin juxtaposes representations of blind people with the stories of actual blind people.

Whether we identify as a queer low-vision woman or heterosexual blind man, The sighted world tends to read our sexuality through the lens of our blindness, as if how much we see determined who we love.  Additionally, gender stereotypes inflect blindness stripping us of “normal” expectations for love, relationships, families, etc. The true and honest stories of Godin and her friends (across the gender identity spectrum) are sometimes funny anecdotes about face-touching and at other times painful moments of ableist assumptions and internalized ableist insecurities that offer a complex portrait of what blind love can be.

Sanctified by Affliction, or Not

Things Sighted People Get Wrong About Blind People on Inside Edition

I decided to reach out to others to gauge my feelings about face touching—specifically: Caitlin Hernandez, Laurie Rubin, and Michelle Kleinberg. At the time, the four of us communicated regularly in order to discuss our writing and our lives as blind women. I sent an email to them with the subject line “Face Touching,” and asked them what they thought of it. All agreed that, with rare exceptions, this is not something we do. Caitlin, who admits to being a very touchy-feely person, and who has been blind since birth, agreed: “I never touch faces, unless I’m making out with someone and/ or unless I’m very drunk and have a crush on that person and use my blind drunkenness as an excuse to hang all over them.” Now, perhaps you, sighted reader, are more circumspect and have never asked a blind person “Do you want to touch my face?” and are amazed that we must actually have responses for such a question prepared because it is so common. But all are not like you.

Laurie, our opera singer in Hawaii who has also been blind since birth, mentioned a time she sang in a master class that was open to the public. After the concert, a woman “around my mom’s age came up to me, and asked if I had any interest in touching her face so that I would know what the person I was talking to looked like.” Instead of waiting for an answer, the woman “took my hand and placed it all over her oily face. I tell you, all I remember from that encounter was a very long nose.” Laurie hastily told her that she does not usually touch faces, and concluded, “It was funny to actually have someone placing my hand on her face while simultaneously asking me if I would find that helpful.”

Laurie added that “truth be told,” she doesn’t even touch her wife’s face very much. “I’ll stroke her cheek or nuzzle my face against hers, but I’m really not much of a face toucher, and prefer cuddles and hugs over face interaction.”

We had this conversation over a series of emails, and the stories kept coming—invitations to touch beards seemed to evoke some particularly gross memories! However, Caitlin mentioned that she has a friend who does feel that she gets something from face touching. The friend had once had vision, and Caitlin wondered if this made the difference, but Michelle and I disabused her of that idea.

Michelle is the mother of an eleven-year-old and is working on a memoir about parenting while going blind. She had this to say about face touching: “I hate when people ask me. I don’t want to touch your face! And, as for one who did see previously, I do not get an image from it—I think it is because I am too busy wigging out at touching a face. The only time I actually loved touching a face was my baby’s just after she was born.”